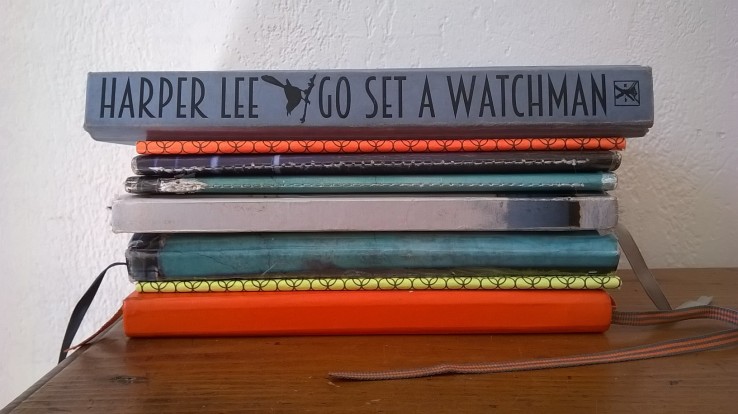 Just over a year ago, Go Set a Watchman, the sequel to Harper Lee’s To Kill A Mockingbird , was published. I remember the furore with which it hit the world. Newspaper headlines were thick with the tale of how this old manuscript had been found in a safe by Harper Lee’s lawyer, how Lee was now frail and unsound of mind and the lawyer had published against Lee’s will. On and on it went, with speculation, gossip and hearsay.

The story of the book trumped the story in the book.

At the time I didn’t ask myself why. I’m not a big fiction reader, preferring non-fiction, and so a year went by before I got around to reading it. I read it this weekend in one sitting and as I read I felt a fury well up in me, not at the content of the book, but at the fact that the real story of this book had been so blatantly ignored by the media who had devoted pages and page to covering its release.

So what is the book about?

The Guardian believed that “instead of clattering towards virgin territory, [the book] carries us, bewitchingly, deep into the past.”

The Wall Street Journal commented that “For the millions who hold [Mockingbird] dear, Go Set a Watchman will be a test of their tolerance and capacity for forgiveness. At the peak of her outrage, Scout tells her father, ‘You’ve cheated me in a way that’s inexpressible. I don’t doubt that many who read this novel are going to feel the same way,” sneers the journalist.

The Telegraph, the bastion of British conservative newspaperdom, didn’t even bother to find out, publishing a piece headlined “Why I Won’t be Reading Go Set a Watchman”, arguing that “what [readers] discover will make many of them sad”.

Business Insider, another UK publication, also dedicated a whole article to the musings of a journalist who refused to read the book: “I don’t want to see one of American literature’s greatest heroes turned into a racist,” she wrote, adding that ‘Gregory Peck is a total babe in the 1962 film adaption as a socially conscious lawyer, complete with three-piece suit and glasses. Racism just wouldn’t become him’.”

So for those of you who may not remember, To Kill a Mockingbird is about a white laywer in Alabama who comes to the defence of a black man who has been unfairly charged with rape. It’s about the white hero, taking on the system, and winning.

Go Set a Watchman is set about 20 years later when the white hero has become old, arthritic, and when his daughter – who had always put him on a pedastal – comes face to face with the fact that her liberal dad actually thinks that black people are less educated, that they don’t have the same values, that yes, they should have equal rights, but… in moderation.

Says Atticus Finch to his daughter Scout:
“Would you want your state governments run by people who don’t know how to run ‘em? Do you want this town run by – now wait a minute – Willoughby’s a crook, we know that, but do you know of any Negro who knows as much as Willoughby. Zeebo’d probably be Mayor of Maycomb. Would you want someone of Zeebo’s capability to handle the town’s money? We’re outnumbered you know.”

Atticus Finch, you see, doesn’t have a problem with black people, as long as they are not running the country and holding the purse strings. Sound familiar?

Go Set A Watchman is a radical book not because it turns a white saviour into a racist – but because it reveals that he always was. That underlying Atticus Finch’s belief in the rule of law and equal rights is a deep-seated, unexamined bigotry with which he is content, and which he believes to be right and true and justified. In the grand scheme of things Atticus Finch is still a liberal, he’s just an awkwardly familiar liberal: the one you see in the mirror.

As I reflected on Finch and the media establishment’s ploy to protect the moral legacy of this old white hero by refusing to engage with the content of this book,  I found myself thinking about one of my Benoni High School teachers who, as a teen, I had regarded as a liberal. Two years ago, I interviewed her for my book, Lost Where I Belong, in which I examine the legacy of apartheid on our hearts and the difficulty of transformation.

I asked what she had thought about apartheid during my school days, and she had replied: “We were good little products of our government, but we weren’t racist. Black people just weren’t a part of our lives. People may have become racist by events that happened after, rather than before. Before we didn’t have anything to be racist about.”

It made me reflect on how hard it is for humans to live with other humans. We can have high ideals and low ideals and fail on them both every day. And we’re certain to fail, over and over, unless we’re prepared to have difficult conversations, and unless our media is prepared to get involved in some of these gritty discussions, instead of polarising us or assuming a moral high ground, so out of reach from so many of us.

Interestingly, the newspaper that published the most decoy hype about Go Set A Watchman was the British newspaper The Guardian – the so-called bible of the liberals. Perhaps it’s not surprising. Perhaps they did just what Scout did when she realised the truth about her father. She vomited and tried to run away.

She didn’t get very far though, and to its abiding credit, in its last scene, Go Set A Watchman challenges Scout to confront her own high-minded, “turnip-sized” bigotry:
“You have a tendency not to give anybody elbow room in your mind for their ideas. You better take time for ‘em honey, otherwise you’ll never grow.”