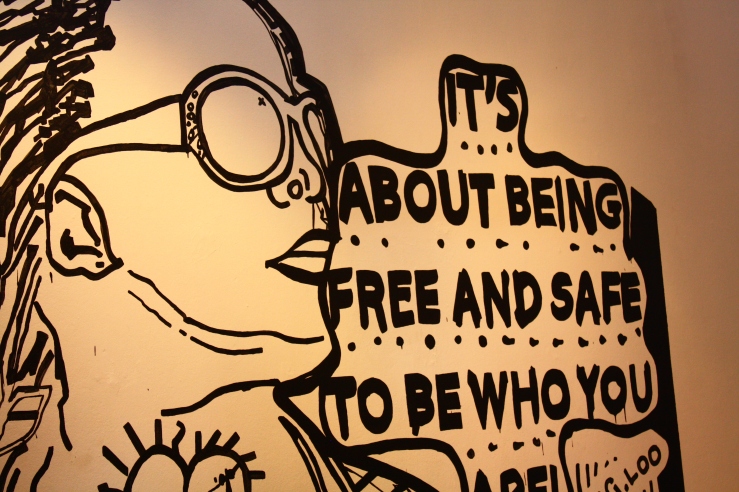 There’s a bar in Glasgow called The Old Hairdressers. It’s down an unlit back lane, the plaster and paint are peeling off the walls, and it’s a favourite of art school graduates and their brethren who huddle around circular tables to have beard-stroking conversations. It’s the kind of place where I look around me and think: “hello my people.”

Last Saturday I met up with my art-school graduate pal to drink copious amounts of red wine and listen to two singer-song writers. The first was a neo-grunge, tuneless wailer, who poured his lyrics into the microphone without ever looking up. The drone was so intentional and unbearable, free earplugs were handed out at the bar.

The second was a punk version of Cat Stevens called The Rebel. His satirical lyrics contain the kind of banal and yet poignant thoughts that you sometimes think to yourself, but rarely say out loud: “Why won’t Thatcher let everything be free? Why must I play for a fucking cup of tea?”
I thought he was brilliant.

After the gig, I got into conversation with a young white Scottish woman who had been fan of The Rebel for over 20 years. She told me that she was an anarchist, and while watching the gig she had looked around at the audience with despair wondering: “Am I the only one who really understands The Rebel?”

It was the cry more commonly heard from teenagers who feel they’ve overtaken their peers and their parents, and discovered eye-rolling new truths that everyone else has missed.

Not to be a bitch, I tried to empathise and said that this was the first week that I had ever looked at the government and thought: “Oh fuck, I might be smarter than the people running this country.”

(This was the week that Theresa May and Amber Rudd had announced they wanted British companies to draw up lists of their foreign employees, implying that hiring hearts, minds and hands from another country, was a shameful act.)

I then went onto say that I came from South Africa. That I am part of a collective that hosts dialogues confronting racism and injustice, and my wish is that people would start to value diversity, rather than condemn it.

And then she walked away.

I stood there in silence, slurped my wine, shook my head, stifled a laugh.

A few moments later, she came back, and introduced me to her black, Scottish, one-armed boyfriend (talk about being a minority) who was so drunk he could barely stand up. He then proceeded to engage in a slurred monologue about how he doesn’t get hangovers, and that maybe it’s because he is an African, while she watched me out of the corner of her eye. It felt like a bizarre test of “prove you’re not a racist”, and as the moments passed, I felt my disbelief growing.

Why is that people – especially so-called radicals – believe that it’s perfectly legitimate to say out loud: “I hate white South Africans”?

Think about it. This is a woman who clearly believes it’s wrong to judge people on the colour of their skins and their disabilities. She would never say: “I hate blacks”.

This is a woman whose who does not see herself represented in the values of mainstream British society and the current Tory government, and firmly believes that the individual is separate from the state. So how can she justify hating me based on the fact that I grew up in a racist state?

We live in confronting times.

This week Mcebo Dlamini, a student from the University of the Witwatersrand who has been very visible in the #FeesMustFall protests – protests that I have a lot of empathy with because I too struggled my way through the financial pressures of an expensive university education – reiterated that he loved Adolf Hilter because: “Hitler took white people [and] starved them to death, the same way they did to black people. That’s why they hate him. I love Adolf Hitler for that.”

But we all know that our personal identities are much more complex than that.

When we will begin to extend that same awareness to the dreaded other?